Skip to content
(This is for all those lovely followers and friends who’ve asked how I got on with last weekend’s adventure. It’s a much longer post than I’d usually make so sorry to those who struggle with reading.)
So Saturday night? It was amazing! I didn’t want to go home. I wanted to stay out in the ‘big wide world’ forever!
I’d been excited and preparing for the Big Night long before the event actually arrived. Admittedly the excitement and nerves and adrenaline had worn me out by the time Saturday arrived, so I tried to relax in my room with one of my many simpleton-friendly DVDs. I was nervous. For a mostly-housebound person it’s huge; to be going out of the house and on a Saturday night no less.
Usually when I see my friends I don’t bother with make-up. It requires effort and energy that I just don’t have and I can hide behind my glasses anyway.
I’d had my heart set on wearing my contact lenses though and that comes hand-in-hand with make-up for me…so I painted on the war paint.  (And I really mean painted! I was caked in the stuff by the time I’d hidden the paleness and bags under my eyes and the random blotchiness.)
If that wasn’t ambitious enough I fished out one of my few remaining pairs of heels. Why not kill me legs off as well as everything else?! Contacts AND heels. I’m crazy wild aren’t I?!

My outfit was simple and as comfortable as it could be; jeans, long baggy vest top (incase I suddenly became too hot) and cardigan. I didn’t faff about with jewellery too much because I was aware I’d have to take it all back off again when I got home.

My friends picked me up, we parked in the nearest available disabled space (one of my new found uses is having a Blue Badge, apparently) and we walked to the short walk to the restaurant/bar.
I ended up sitting between my friends on a super comfy chair. It was noisy in the restaurant but everyone thought so, so it wasn’t just an M.E thing. I chose carefully from the menu, not wanting to trigger stomach pain or digestive problems (sorry!) I treated myself and drank Coke. How naughty to be having caffeine after 4pm but it was a special occassion. (I can no longer tolerate alcohol, not even the smell of it.)
After the meal we moved to the bar area for drinks. Again we found seats and I embarked on the next part of my Saturday Night Adventure. I went to get served at the bar. Dun dun dun! 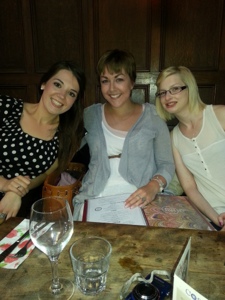 I nearly bottled it twice while I waiting to be served. It was busy and crowded and noisy and the wait felt quite long for someone who doesn’t manage to stand for more than a minute or two. I’m no longer confident with money so that little voice in my head had to really work hard at coaching myself into staying calm. What’s the worst that could happen anyway? I could have just handed my purse to the barman and flashed my medical ID bracelet if I’d had to. (It’s like being a member of some exclusive club what with my bracelet and my Blue Badge.)
I probably looked close to tears by the time I mumbled my order but I did it! And I carried the two drinks back to our table. I think it has been two and half years since I last ordered a drink at a busy bar on a busy evening. What an achievement!
As for Mixing with the Normals, everyone was lovely and the topic of M.E never came up and I didn’t have to answer any questions about jobs. I could join in with some of the conversation because it was about university and then I listened to how everyone else was getting on in the their work or in their relationships or whatever else they were up to. Just to out of the house for one of my best friend’s birthdays was enough. The rest was all a bonus. I don’t know if anyone knew I was ill or whether they’d been told before that “it’s Anna who’s the ill one”. I wouldn’t have been embarrassed by it and I don’t mind whether they knew or not. For that evening I wasn’t the illness. I was just me and it was wonderful.
Sunday was a pj day, Monday was a bed day and the rest, while I managed to get out of bed and dressed, is a bit of a blur. I feel a bit away-with-the-fairies, not helped by having to endure my first cervical screening this week. Don’t worry I won’t go into any more detail!
But none of this payback will take away from Saturday. In years to come, when I look back at The M.E. Years, it is Saturday night I will think of, not the aftermath, which will no doubt become blurred in with the rest of the poorliness.
Just to be invited is a big deal if I’m honest. So many of my M.E friends no longer hear from those who they considered to be close friends. Over time people can drift apart, naturally, but invisible chronic illness can make things even harder. Alas I have this small group of friends who still, after two and half years of cancelling plans, being unable to travel to housewarming parties or birthday meals, include me and accept my new limitations. They may not understand my illness but that doesn’t necessarily matter because, to them, I am so much more than just ‘the poorly one’.

One thought on “The Adventures of Anna Jones – Mary’s Birthday”